This was a busy week for us here at the Elderd Lab. We were in the field at the end of last week collecting caterpillars. It was a pretty nice day, all things considered. In the next few days we will watch for caterpillars dying of virus infection as our response variable.

Bret bringing in another plant to dissect.

Later in the week, I set up a new lab experiment similar to bugs in bags (above), but I call it bugs in Spock tubes. Logan, Peyton, and Jacy all helped put the Spock tubes on and fill them with the appropriate amount of infected caterpillars. Hopefully, those caterpillars will be begin to die over the next two or three days, at which point I’ll put healthy caterpillars on the plants. With any luck, these data will be part of the second chapter of my dissertation.

Spock tubes all set up with caterpillars

On Saturday we went to the Jean Lafitte National Historic Park and Preserve in New Orleans. It was a beautiful day for a hike and we saw a ton of cool animals. Three garter snakes, a brown ribbon snake curled up on a lizard tail plant (below), a southern banded water snake, a gator, a raccoon crossed in front of our trail (below), and a handful of fun insects and birds! 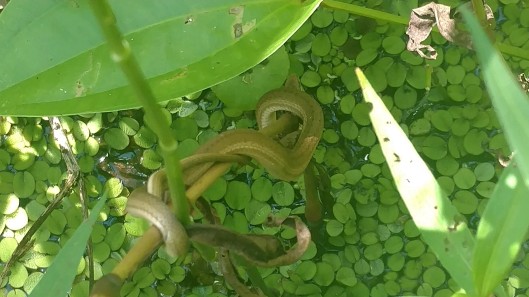