The 1870 House is well on its way to being where we want it. Last night, after work, we worked for a few hours on the floor upstairs (and did some laundry!). It was an interesting experience; here’s just a few of the things we found under the baseboard: magazine advertisement for Bazaar, popsicle stick, popcorn kernels, and some clear plastic beads. We first pulled the carpet staples and weird tackboard stuff that held the carpet in along the wall. It wasn’t the easiest task and the boards in the room don’t inspire the highest confidence. Here’s Tatum sweeping a bit and pulling out nails: 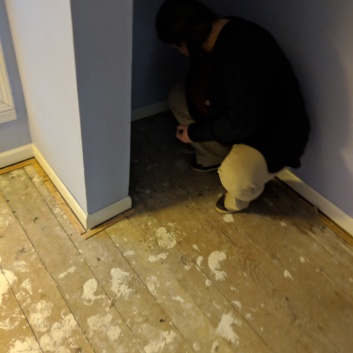 After we got the floors de-stapled, de-nailed, swept, and vacuumed, we put down a coat of Kilz. It is quite pungent, but we’ll take that over pet urine! Here is a bit of a before and after/during. I didn’t get a good picture of the whole completed room since there’s no overhead light in that room and we took the lamp out before we finished (no painting ourselves into corners!). 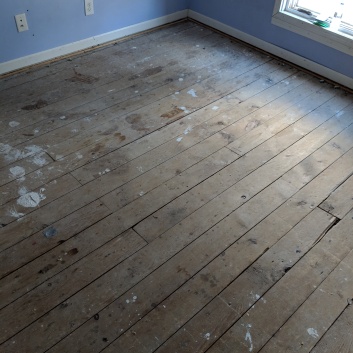 Tonight or tomorrow we’ll put down a coat of floor paint, then once that dries we plan to get a carpet remnant for the room to function as a big rug. That will pretty much be it! Oh, there was a lot of head hitting since the ceiling is sloped with the roof, so we’re going to be sure to get furniture in the low bits to prevent future headaches! It’s exciting to have one room almost completely done! Plans for this weekend include getting internet hooked up, vacuuming the floors now that the dust has settled from sanding, putting down polyurethane, and maybe getting some of the basement cleaned up so dirty ducts can cover up the last bits of asbestos down there. We don’t have much in the basement, but the four chairs we bought from the ReStore are right under where they’d need to work, so we’ll have to move those. Look for another update soon!